Uganda is located on the East African plateau, averaging about 1100 metres (3,250 ft) above sea level, and this slopes very steadily downwards to the Sudanese Plain to the north. However, much of the south is poorly drained, while the centre is dominated by Lake Kyoga, which is also surrounded by extensive marshy areas. Uganda lies almost completely within the Nile basin. The Victoria Nile drains from the lake into Lake Kyoga and thence into Lake Albert on the Congolese border. It then runs northwards into Sudan. 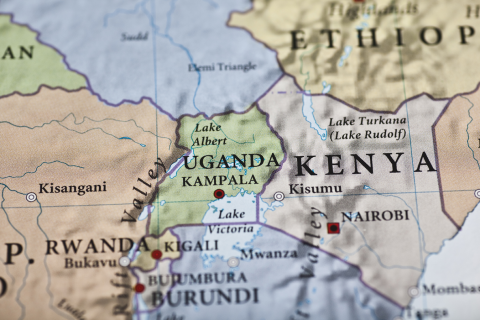 Although generally equatorial, the climate is not uniform as the altitude modifies the climate. Southern Uganda is wetter with rain generally spread throughout the year. At Entebbe on the northern shore of Lake Victoria, most rain falls from March to June and the November/December period. Further to the north a dry season gradually emerges; at Gulu about 120 km from the Sudanese border, November to February is much drier than the rest of the year. The northeastern Karamoja region has the driest climate and is prone to droughts in some years. Rwenzori in the southwest on the border with Congo (DRC) receives heavy rain all year round.

The south of the country is heavily influenced by one of the world's biggest lakes, Lake Victoria, which contains many islands. It prevents temperatures from varying significantly and increases cloudiness and rainfall. Most important cities are located in the south, near Lake Victoria, including the capital Kampala and the nearby city of Entebbe. Although landlocked, Uganda contains many large lakes, besides Lake Victoria and Lake Kyoga, there are Lake Albert, Lake Edward and the smaller Lake George. Uganda's climate and location makes it ideal for agricultural success.